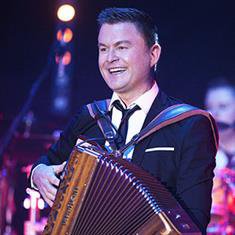 Following the huge success of Michael’s previous U.K visits, he brings his fantastic show to The Millfield Theatre for the 1st time on September 18th. He will be joined by his super band along with special guests Keith & Lorraine McDonald Michael has gone from strength to strength in the last 5 years packing out venues all over Ireland & The UK for both concerts & dances. Michael & his talented Band are renowned for their energetic performances & with Michael's musical talents he plays both his famous "red piano" & accordion at his shows. He is dedicated to giving his followers an unforgettable show each time they see him. And with accolades like "Best Country Dance Band" at The Irish Country Music Awards & "Performer of the year" at The Sunday World country Music Awards under his belt there is no stopping the Kildare man! Michael has released his 1st ever Live DVD & Live Double Album since his last visit and has had numerous hit singles including "Joey on the Fiddle" & "Then it's Love".