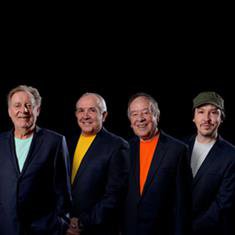 A stunning must see show, features a sensational line-up of musicians, that deliver a show that exceeds expectation on every level. Taking you on a magical rollercoaster ride to the most exciting musical time in history, with endless hits from the sixties and early seventies when pops greatest decade comes to life!. Brilliant said The Mail on Sunday, Five Stars said Len Stewart The Beat, Best 60s show around, Jon Martin BBC. DOZY , BEAKY , MICK and TICH scored a Number One hit in the UK Singles Chart in 1968 with "The Legend of Xanadu". The combined sales figures were in excess of one million copies. Their other top 10 UK hits included "Hideaway", "Hold Tight!", "Bend It!", "Save Me!", "Touch Me, "Zabadak!" and "Last Night in Soho" "Bend It!" was a big hit in Europe, including a Number One in Germany. UK and European sales were over one million "Bend It!" was later used in an episode of the American animated sitcom Futurama entitled "The Mutants Are Revolting". Supported by: THE TORNADOS ‘Worldwide hit ‘Telstar’. The Tornados offer the ultimate ‘rock’n’roll’ experience with a high polished performance and a repertoire to match! Paul McCartney gave the ‘thumbs up’ of approval after having personally jammed with the band himself. The band has a whole host of experience playing with some fantastic and, quite frankly, legendary artists, they will have you dancing, swinging, shaking and shouting all night long. THE FOUNDATIONS led by founder member backing vocalist Alan Warner, delivering a fast-paced, exciting show, packed with hits including, ‘Baby Now I’ve Found You’ and Build Me Up Buttercup’, as well as rarer numbers from the original group’s catalogue. At the end of the show the band members will be available for a brief meet and greet.